Former police officers are locked in a standoff with cops in the San Bernardino Mountains in Los Angeles.

Popes are stepping down for the first time 600 years.

Geez. It only seems fitting that our president is addressing the nation tonight in the State of the Union Address amid all of this chaos.

And I must apologize — if you clicked on all of the links above, then you just consumed 20% of your allowable monthly article limit for the New York Times website. How ridiculous is that? I have to pay to read the freaking news. I’m actually disallowed from staying updating in worldly events because I am not paying $3 a month. New York Times, I know you need money, but isn’t it more important to inform? Just hold an annual donation drive instead to fill your financial quota. But I digress.

I know more people are more concerned with the Real Housewives of Bumblefuck, or wherever they are right now, but there’s actually a lot of crazy stuff happening in the world right now.

World leaders were officially put on alert yesterday when seismic activity was detected in a region in North Korea that is known to be a testing spot for nuclear missiles. Knowledgeable minds immediately assumed nuclear testing — especially since the country had previously divulged its intentions to continue nuclear testing — and then the nation later confirmed it.

How scared should we be? That’s really the question. The majority of people are going to read this news and think — alright, so cut to the chase. Is my life in jeopardy, or what? Well, here’s how I can put it in terms for most people to understand:

This was North Korea’s third nuclear test in the last seven years. Their first test, in 2006, yielded six kilotons. What the hell a kiloton is and how it relates to other metrics is irrelevant. Just keep listening.

By comparison — and this is where the understanding should kick in — The United States’ bomb that we dropped on Hiroshima in 1945 yielded fifteen kilotons. So here is what we know:

Yes, at the very least, you should be slightly alarmed.

By the way, I find it amusing how formal this all is.

Actually, first, I should voice my amazement at how highly advanced we are technologically. Satellites in outer space were able to detect the seismic activity in North Korea as soon as it happened. Radar signals then detected where within the country they occurred. World leaders probably assumed nuclear activity within minutes of the actual occurrence. If not sooner. So that’s cool.

But back to the formality. I love how we, and by we I mean the United States and other world superpowers, are just sitting back and letting this happen. We know that North Korea is building these weapons for malicious reasons. They’re not doing it just to have them. This is a country that lives for warfare. The one silver lining, though, is that they still have to create the technology enabling them to launch its missiles all way to the U.S.

And yet, there’s not much we can do because why should we waste American lives on a war when we know that they are still a long way away from being a legitimate threat?

However, I think — with this recent test — it’s at least time to start thinking about what we should do. It’s not just the U.S. that is pissed. It’s the world. China’s pissed. South Korea’s pissed, obviously. Narnia is pissed. And you don’t want to piss of Narnia. You don’t want to mess with Aslan.

It should also be noted that North Korea’s leader, Kim Jong-un, is only 29 years old. I don’t exactly trust a 29-year-old to make the most sound, responsible decisions. In fact, forget what I said before about how our satellites detected the nuclear activity. I bet we learned about it because of a post on Kim Jong-un’s Facebook wall.

So yeah, there’s that. To the logical mind, it might seem insane to wonder how people can be so concerned with the recent season of The Bachelor when a country that has absolutely nothing to lose is slowly gaining the capability of  beginning World War III.

What else is happening, again? Oh yeah, the Pope stepped down. 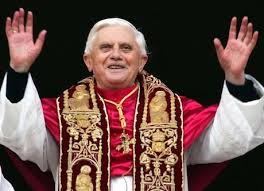 Pope Benedict XVI, who has been the leader of the Roman Catholic Church since 2005, announced that he will be resigning. This is crazy because this isn’t like Steve Jobs announcing he is leaving Apple. This is basically the closest we will ever come to God himself descending from the heavens and saying, “Yeah, guys, I’m kinda tired here, so, uh, I think I’m going to take a break for, like, forever. Hope that’s cool.”

Benedict is the first pope to resign since Gregory XII in 1415 — and we all remember that year, am I right?? — and the first to do so voluntarily since Celestine V in the year 1294.

That’s more than seven centuries ago. That’s like, 700 years before the Backstreet Boys became popular. Woah.

The Popedom (not sure if that’s a word) is typically supposed to be an-until-death-do-us-part-type job, but apparently, Pope Benedict didn’t want it that way. You see what I did there?

As someone who is not really a devout follower of any religion, this news doesn’t really have too much of an effect on me. In fact, I’d be absolutely lying if I didn’t admit that the very first thing that popped in my head after hearing this news was the movie Eurotrip.

I guess that says a lot about me.

Vatican officials say that a new pope will be in place before Easter, so I guess that means we all have something else to look forward to this holiday season.

Well, as I finish this post, the State of the Union Address just ended. I got into politics a little bit this year in light of the highly contested election in November, and yet, I still don’t really care about this speech because it doesn’t really mean anything.

That’s not a slight towards Barack Obama, it’s just commonplace for our president to stand before us and discuss the best-case scenario

for every single controversial topic. Whenever the president discusses an issue, whether it be healthcare, or tax reform, or the environment, and he concludes by saying, “I urge Congress to work together…” I laugh. Because that is a pipe dream.

However, it is nice to see the traditional reinforcement and instilling of confidence from our Commander-in-Chief, and to this day, I am still grateful that Mitt Romney is not the one doing it.

A scary and ominous factoid I learned today during the NBC broadcast is that, apparently, for every State of the Union Address, our government picks one important and powerful official to not attend the festivities. Why? Just in case there is a terrorist attack, and we need someone who is important enough to lead our nation after it. The person is called the “Designated Survivor.” If that’s not morbid, then I don’t know what is.

I wonder if that person is chosen the same way that a group of friends might pick a designated driver before a night out?

And like all designated drivers, I wonder if they still get drunk anyway.

But instead of driving drunk, the designated survivor would lead a country drunk.

But hey, George W. Bush did that for eight years, so why not?