You know, I was thinking today — In all of my near-26 years of existence, I never really understood Valentine’s Day. I just didn’t get why girls are so anticipatory of that day, and why they cherish it so much.

As a guy, it’s just something I’ll never understand. I try to think about it — I try to put myself in a woman’s shoes, and imagine why Feb. 14 is so special. Because I don’t care under what circumstances in life I find myself in, I will never, ever anticipate Valentine’s Day. Never.

But then I realized — I think I do get it. I think I can finally understand the emotion that females’ experience in the days leading up to 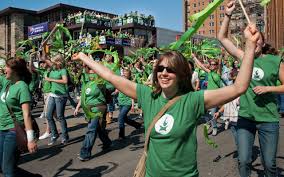 The way I realized it is, because, all of the feelings emotions and excitement that a girl harbors for Valentine’s Day — that is exactly how I feel for St. Patrick’s Day.

Right now it is three days until St. Patrick’s — but really two days until the Saturday before St. Patrick’s Day, which is all that really matters — and I feel like a 7-year-old does on Christmas Eve.

I honestly own one green shirt. One. And yet, I’m saving that bad boy for the big day.

In the past I have been very critical of this day. And while there’s still plenty of things that I do not like about it, I’ve decided to shelve all that aside and just embrace it. It’s a day where every one in the world, regardless of skin color, gender, ethnicity and sexuality, joins together under one common cause — to drink beer. And not only to drink beer, but to do it recklessly, unhealthily and irresponsibly. It’s something that we can all finally agree on.

A girl may be reading this and wonder why I can be this excited. It’s the reverse effect of Valentine’s Day, where guys wonder why girls care so much about that holiday. While I know there are plenty of girls who enjoy St. Patrick’s Day also, it’s not like how we do. It’s not.

Guys don’t plan anything. Ever. It’s embedded in our nature. We are just physically, mentally and emotionally incapable of planning things.

Except on St. Patrick’s Day. We’ll even make plans months before March 17 for this day. In fact, how much do I love this day? I am actually intending (key word is intending) to abstain from going out and drinking on Friday, just so I can be ready to go first thing on Saturday. I am that committed.

That being said people, be smart. Don’t follow your stupid friends whose plan is to simply “go into New York City” and then just take it from there. Plan ahead. Scout out an area that you know is off the beaten path, and where you won’t be bombarded by hundreds upon hundreds of bar-hopping-green-shirted fiends.

Also, stay away from the places that try to take advantage of people on St. Patty’s, and overcharge for their beer, or demand a ludicrous cover charge. Go to a bar that you trust, and that you know would not do such things.

When you hit your mid-twenties, you’ve reached a point in your life where you know how important beer is to you. Everyone drinks in college. But a lot people either stop or temper their drinking habits after that. Some do it voluntarily. Some do it out of necessity.

And some never stop. Maybe they will later in life, but if you’re still going strong into your mid-to-late 20s, then odds say you’ll probably continue consuming alcohol for a long time. So to have a holiday that celebrates beer, and embraces it, then that’s a win.

It’s even more significant this year, because Irish people have a lot to celebrate. According to Wikipedia, 73% of Ireland’s population is Roman Catholic. So in a span of five days, they received a new pope and now they get to celebrate their biggest holiday of the year.

Of course, I am not Irish. There is a reason why this blog is called Weinblog and not O’Malleyblog.

But most importantly: everybody, enjoy yourselves and make irresponsible decisions in a safe and controlled manner. As for me, I am going to get out my iron and ready up the one green shirt that I own.

That’s right, I use irons in the days before St. Patrick’s, too.