Easter Sunday may have represented the Holy Day for Catholics, but Opening Day is the real Holy Day for us baseball fans.

Not to say that I’m not happy now, in fact, I’m very happy. However, back then, I was blissfully happy. Meaning I was joyously ready to embrace every day, without having any direct knowledge of the hardships that would come with age. It was a great childhood.

Not many things restore that feeling that I once had as a child. Maybe chocolate pudding. Or possibly whenever I hear the song “Torn” by Natalie Imbruglia. Which ironically is about rape. I didn’t know that until a few months ago. But that’s besides the point.

But one thing I can wholeheartedly confirm that does restore that childlike, blissful feeling of elation is Major League Baseball Opening Day. There’s something about seeing the sun shine down on the freshly cut grass, the way a baseball sounds making contact with a bat, and the roar of the fans when the home team takes the field that makes me giddy. It’s unexplainable.

My team is the New York Mets, and I left work today when they were winning their game today 11-2. No joke, I was legitimately running down the hallway to get to the exit with a giant grin on my face, just so I can get to home to catch the end of the game even though the result was already a foregone conclusion.

As I ran down that hallway, I didn’t feel like my 25-year-old self running down my work hallway. Instead, I felt like my 12-year-old self, running home from school so he could change into his pajamas and watch the game on his favorite spot of the living room couch, because it was the only TV in the house. A lot may have changed since then, but my love for the game has not. And I’m sure thousands of other baseball fans like me felt the exact same way today.

That’s what makes today Holy. But unlike Easter, I don’t need to eat dinner with my extended family, nor do I need to attend Sunday mass. I just have to cozy  up in front of my television (which are now more abundant in my household), and watch. After all, there’s a reason why we — the fans — watch, and don’t play.

In fact, I can give you two examples of this that occurred this weekend. On Saturday, I played competitive football for the first time in nearly two years. While I am used to running pretty long distances, I am not used to sprinting on-and-off again over the course a few hours.

Therefore, I am experiencing soreness in my quads two days later like no other, and it is both painful and extremely embarrassing. In my teens, I could play football anytime and anywhere, and be fine the next day. But in my-mid 20s, we fall out of “game shape,” and just a couple of hours of pigskin has rendered me unwalkable.

So that’s one reason why I let the superstar athletes compete, and why I sit on my bed and watch while eating nachos.

However, even the superstar athletes are not immune to injury. And example two of why most people don’t compete in sports at a high level is, because, when you compete at a high level, you tend to injure yourself at a high level.

Most people are probably aware of the horrific injury that occurred to Louisville guard Kevin Ware on Sunday. He broke his leg so badly that the bone was actually popping out of his skin.

When some people break bones, the severity of their injury is sometimes described with a sentence like, “It broke so badly that it almost popped out of the skin.” Well, that happened for real. And it’s as gruesome and horrifying as it sounds.

I’m not usually too daunted when it comes to sports injuries, especially since you grow accustomed to seeing them when you watch sports as often as I do. But this is an injury that I am making a point to never watch a video or see a picture of. When I heard the part about the bone protruding from the skin, and a player on the Louisville bench actually fainting when he saw it, then I was out.

All I know is that I am never jumping again. The injury occurred after Ware jumped to contest a 3-point shot, and he came down and shattered his leg on the landing. That information is enough to deter me from ever attempting to leave my feet again for the rest of my life.

And seriously, I’ve already discussed how I am not an athlete — so what purpose do I ever have in life to ever jump again? I’m never going to partake in a game of Leap Frog. I’m not ever going to do vertical leaps at the gym because I’d probably pull a groin just thinking about doing them. And I’m perfectly content walking around objects that are blocking my way rather than trying to leap over them. I’m not Super Mario.

So I actually see no reason why I can’t live our the rest of my life without ever having to jump again. I think it’s perfectly feasible and after seeing what Kevin Ware did to himself, then I think it is a safe plan.

But here’s hoping to speedy and successful recovery for Mr. Ware. Here is a cool and inspirational image that surfaced around Twitter shortly after the game: 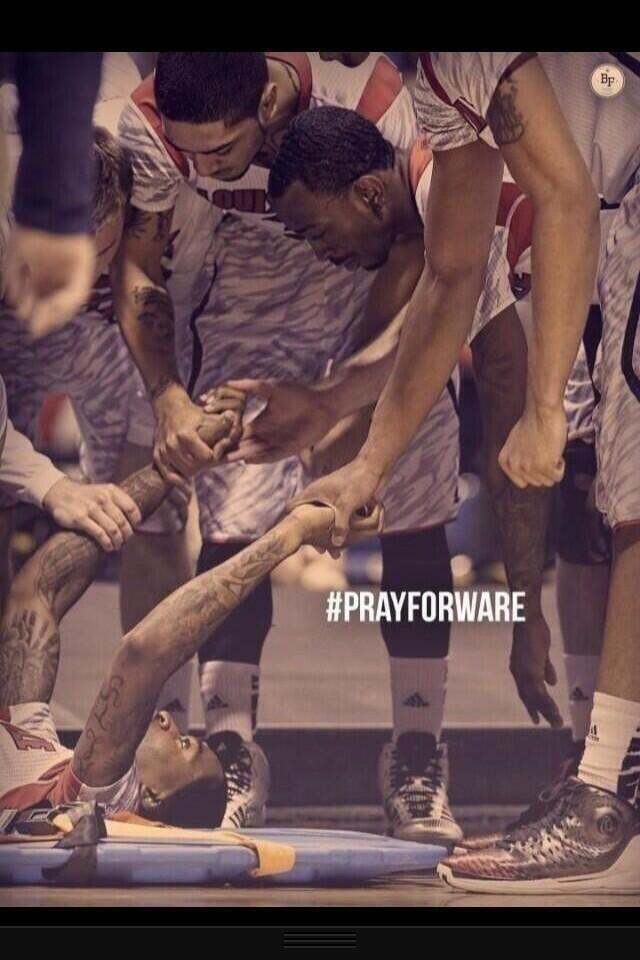