About a month-and-a-half ago, I realized that my driver’s license was due to expire on Sunday, April 7, which also happens to be my 26th birthday. (SHAMELESS BIRTHDAY PLUG.)

So, naturally, I waited until the very last week to go do that. Because let’s face it, nobody goes to the office of the New York State Department of Motor Vehicles unless they absolutely have to.

somebody they were going to a funeral.

Not many places are looked upon less favorably in this country then the DMV. Maybe Cleveland.

But I went today, and I must say, I absolutely enjoyed my experience. And I am not being the slightest bit sarcastic at all. In the time I was there this morning, I was complimented, I was wished a happy birthday, I had a brief interaction with a hot girl, and I was in and out in no time. It was absolutely joyful.

You only hear people talk about the negative experiences they had at the DMV. And nothing else. No one ever comes back from their trip to the facility and raves about how good of a time that they had. Well I will be that first man.

One of the reasons the DMV gets such a bad reputation is because of the lines. People get there, see the line, and act like this is the first time in their lives that they have ever waited in a line before.

Hey, people, don’t you wait in a line for, well… everything?

When I get my coffee at Dunkin Donuts in the morning, there’s a line. Albeit a short line, but a line nonetheless.

When I drive to work during rush hour in the A.M., and am stuck in traffic, then yes, I am essentially waiting on a 3-way line. And girls, when you go to the mall to buy a discounted scarf, don’t you wait on line for hours?

Even when I go to do things that I like, as in go to a concert or a baseball game, then I have to wait on a line to get my ticket
stamped or checked. 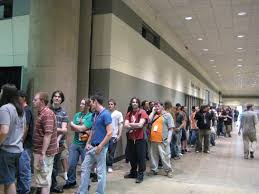 Waiting on lines is extremely commonplace. And yet, when people get to the Department of Motor Vehicles and see a line, they act like the line they’re getting onto is one that leads to a firing squad.

Of course there’s going to be a line at the DMV. You have hundreds of people flocking to the place for about 95 different things. Every single person has a form, some are holding four license plates for God knows what reason, and half of the people there can’t even speak English. And to boot, they’re all waiting for one single teller.

I think the problem that people have is their mindset. They enter the building thinking they are going to have a miserable time, and when they see the line, they act like their worst fears are confirmed. It’s like people actually expect that the one time in five years they head to the DMV is the one time ever that there will be no line.

So, I got there, and I stood on line. No big deal. Fortunately for me, there was a cute blond directly in front of me.

When you have the same full-time job for a few years, and thus fall into the same patterns day-in and day-out, you don’t often surround yourself with many new people. And worse, many new hot people of the opposite gender. So when you are afforded any opportunity to be anywhere near a hot chick for an extended period of time — even if it’s at the DMV — it’s never a bad thing.

At one point, the blond actually got off-line to grab a form, and when she returned, she was unsure if she was getting back on the same spot in line. So she asked me. Caught off guard by a hot chick actually talking to me, I simply replied, “Yeah,” and actually pointed to the spot in front of me, as if she couldn’t find it herself if I didn’t properly direct her. Smooth.

That ended our interaction. But, by definition, it was an interaction with a hot chick, and it filled my quota for the day.

After about half-hour of waiting in line (“Oh my God!!”), it was finally my turn to approach the teller. It was an elderly woman, and I told her I was here because my license expires on Sunday. Her response was “Happy birthday on Sunday,” and I politely thanked her, and with that, I had my very first birthday greeting of 2013 — the elderly teller at the DMV.

So after supplying the necessary information, I took a step back and she took my new license photo. I asked her if it came out well, and she not only said yes, but then said, “You could be a model.” Yes I am aware that she was just flattering me and being friendly, but I am equally as sure that she would not have said such a statement to an ugly person. So there’s that.

Spoke to hot blond? Check. Was wished a happy birthday? Check. Was told I was good-looking? Checkaroo.

called. It was, and I took the “eye test,” which shouldn’t legally be called an eye test because it comprised me standing five steps away from an eye chart and reading one single line. I’m pretty sure the woman testing me wasn’t even paying attention, either. The entire process took approximately nine seconds, and it was over. And with that, I completely understood why there are so many awful drivers who remain on the road.

And that concluded my trip to the DMV. I went into the building expecting to be there at least an hour, and I was gone in 45 minutes — so my expectations were actually exceeded.

I can honestly say that I had an enjoyable experience. I laughed, I smiled, I passed an eye test, I had a stirring conversation with a an attractive girl, and I was wished a happy birthday. What more can a guy ask for?

So next time I hear somebody groan with dismay as they utter aloud, “Ugh, I have to go the DMV tomorrow,” I will reply by telling them how jealous I am of them.

In fact, I had such a good time that I think I may actually take a date there.

Hey, it can’t go any worse than my previous dates.

The bar is really, really low in that regard.