There’s nothing more important in life than having friends.

Friends are the people you can rely on. They’re the ones who are always there when you need somebody to talk to, and vise versa, you’ll always be willing to lend an ear when friends need you.

Will friends sometimes annoy and badger you at times? Sure. But that’s what makes them friends. It’s like having a cat that you love. You complain that your cat is always up in your grill, jumping on the dinner table while you’re trying to eat, or leaping onto your laptop and trying to smell your face when you’re typing something important. The typical human response is to tell your cat to “Shoo!”

The same goes with friends. They may Gchat you up every day, and blow up your phone when you’re in an important meeting at work, but that’s what makes them your friends. You’d much rather have them blow up your phone at an inopportune time than to never try to contact you at all. And yes, it just occurred to me how inappropriate it is to use the words “blow up” after yesterday’s events.

So friends are great. They may go away for a while when times get rough, but if they’re your real friends, then they’ll come back.

Oh wait, did… you think I was talking about friends, as in, real-life actual friends this whole time? Oh God. Oh dear. There has been a terrible confusion.

I don’t give a shit about my real-life, actual friends, I’m talking about these guys! 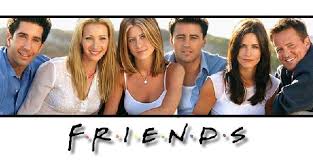 Rumors have been running absolutely rampant over the Internet recently about the possibility of a Friends reunion.

Next year, of course, would mark the 10-year-anniversary of when the show went off the air, so naturally, if there ever was to be a reunion — 2014 would make the most sense. Hence the rumors.

But so far, that’s all they’ve been. Rumors.

Today those rumors may have taken a slight notch up, as some entertainment website called Starmedia claimed that NBC not only confirmed a Friends reunion episode, but an an entire new season.

Of course, it’s hard to actually believe a website that you’ve never actually heard of before today, and it’s also hard to take them seriously when, in reality, NBC hasn’t actually confirmed jack shit.

However, the site’s claims did stir some chit-chat among the cyber world, enough so that the Huffington Post actually picked up the story. So that’s something.

It’s funny, last week I was talking about how a publication as popular and powerful as the New York Times has the ability to create truths simply by suggesting them in their articles.

Well, what if people could do that too? After all, the fans brought Arrested Development back from the dead, so why can’t they do the same things with Friends? If rumors continue to swirl, and people continue to be enthralled with the possibility of a reunion, then why couldn’t the network, the producers and the actors all sense the excitement and think, “Well, maybe…”

And come on, what exactly are they all doing that’s keeping them so busy, anyway?

Yes, for it to work, all six would need to agree. But if five of them voice their approval, then would the sixth one really want be known as the one person who prevented millions of fans from getting the reunion they so desperately wanted?

On a side note, it’s amazing to me that Lisa Kudrow is actually the best looking of the three women now. I basically went through puberty just by watching Jennifer Aniston on Friends in the late 90s, and then watched Courteney Cox blossom into a fine-looking woman.

But now they’re all in their mid-to-late 40s, and I honestly think Kudrow has the best natural look of the three. Just look to your left.

Jesus Christ, if my wife looks like that when she’s pushing 50, I’ll be a happy man.

People used to think it was cool to hate on Friends, because it was far and away the most popular sitcom of its generation. However, ten years later, I think all one has to do is examine the current state of today’s laugh-track sitcoms to appreciate just how quality of a show it really was.

As you can tell, I am very hopeful that this reunion will occur. I think it makes perfect sense. It’s exactly 10 years later, and we can jump right into exactly what Monica, Ross, Chandler, Rachael, Joey and Phoebe are up to in their lives. There’s no need for an elongated introduction. Just jump right in.

We don’t need a full season. That would be overkill. Just a one hour-long — maybe two hour-long — special is all we need to satiate our Friends fix.

Plus, it would finally rid us of the bad taste in our mouths that was Joey.

Oh well. Time to go listen to the Rembrandts on my iPod.