I understand how studios want to keep pumping out a franchise to make money. I’m not ignorant enough to not realize why that is a successful equation. Familiarity breeds interest, which leads to attendance, which equals money.

But when a film franchise gets to a fourth sequel or higher, that’s when they’re just fucking with us.

There’s no question that sequels can be done right, and done well. If an original film is successful, then why not continue the story? Find the right screenwriter to craft a script that will transition perfectly into the next chapter of the tale, and give the film’s fans another picture. That’s fine.

Very rarely, there are times when a trilogy is needed. Many of the times these are preempted, like the original Star Wars. Or sometimes an adaptation is based on a set number of books, so there’s no choice but to make that many movies, like Lord of the Rings or Harry Potter, the latter of which had seven books. That’s fine too.

But when it clearly gets to the point when filmmakers are like, “Okay, these movies keep making money, so let’s, uhh, keep making them.” Well, that is when I start to get pissed off.

When the original Fast and the Furious was made, there is no way in hell the producers thought that there would ever be a sequel. No chance. When that movie was being filmed, nobody in their right mind was like, “Yeah, we’ll be making these movies for the next twelve years!”

And I actually liked the first movie. For what it was — an action flick involving fast cars and hot chicks — it was good. It accomplished what it set out to do.

So riding off of the success, a sequel was made. It featured the same lead actor in Paul Walker (who may be one of the least talented actors in the world) and a new co-star in Tyrese (who may be one of the least talented R&B singers in the world). The movie probably made decent money, but all in all, it was a flop. I saw it shortly after its release, and I honestly couldn’t tell you one thing that happened in the movie. Other than the fact that cars were driven.

Three years later, a spin-off was made. In my mind, spin-offs don’t really count as legitimate sequels. Almost every movie has its own made-for-TV spin-off. But, you know, the movie franchise still carried some weight, so they gave it a shot. Again, the movie was probably a flop critically, but I’m sure it made some coin. It should have all ended there.

It should have all ended there.

But then THREE sequels were made. Not one. not two. Three.

The fourth movie relied on a return of all the main characters to pique people’s interest. It worked. But the movie sucked.

The fifth one relied on the introduction of a new action star in Dwayne “The Rock” Johnson to pique people’s interest. It worked. But the movie sucked.

Newsflash: THEY ARE ALL THE SAME MOVIE. 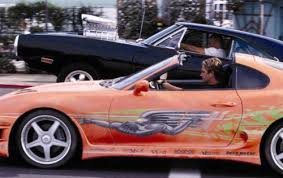 I swear, there must be some type of hypnosis going on during these movies, because for the life of me, I can’t understand how people keep wanting to see them. And the only thing worse than people who want to see them are the people who see them and then actually think they’re good.

Fast & Furious 6 made $97 million this weekend. And yet, in the central United States, Oklahoman houses lay buried to the ground. $97 million could save an entire city in Oklahoma right now. In days.

If people want to see fast cars, crashes and loud noise, then go to a freaking NASCAR race. Heck, go plant a lawn chair on the grassy area next to your nearest highway. Sit there for two hours and you’ll essentially have seen the entire plot of Fast & Furious 6.

I blame the Saw movies for starting this. They made a sequel each year, knowing that people will see it, and they kept it going as long as they knew people would still remain interested, despite the fact that the films lost all semblance of originality after the second one. It was almost like a case study. Well that one got to seven. Fast and the Furious is just one away.

The worst part? I just checked IMDB.com. Fast & Furious 7 is already in pre-production.

Excuse me while I go swallow an entire container of cough medicine.