I haven’t seen the movie I, Robot starring Will Smith, but I’d bet my next week’s paycheck that this is exactly how the plot progresses.

And I think we’ve achieved it.

No, it wasn’t by some Austrian physicist who has spent hours in a laboratory perfecting his creation. No it wasn’t Bill Gates. It wasn’t even Dr. Frankenstein.

The pizzeria has partnered with a creative agency to create DemiCopters, which essentially are drones that can deliver pizza to your house within a four-mile radius.

The current model is piloted by a person from the ground, but future models could potentially be delivered using GPS coordinates.

Just think about the implications of this.

No more having to repeat your address 12 times over the phone with said pizza delivery boys.

No more having to hold the door a quarter-open to safeguard your home from a potential stranger gaining access to it while you make a money-to-pizza exchange.

And finally, no more tipping.

It’s not even the obsolescence of tipping that is the most thrilling prospect. It’s the obsolescence of the stress of having to tip. No more questions like, “The pizza 45 minutes late, should I even bother tipping?” or “Aww, he’s probably some kid trying to make some side cash to pay for college, maybe I should tip more.”

There’s no worry with robots because they don’t have feelings (for now). So there’s no conversations. No gratuity. No fear of home invasions. Just grab your pizza and you’re done.

I really hope this is something that takes off because it is our current generation that is going to reap the benefits. Aside from actual computers, this is the first instance I can think of where actual technology is replacing a longstanding practice, where humans were always the one to transfer food deliveries from restaurants to homes. It’s setting a very dangerous precedent. 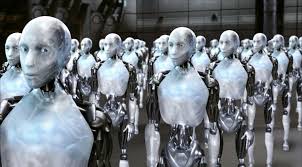 However, as a moderately sized airborne drone, I really see no harm in it for us. It’ll be exciting and new, and we get to be the first ones to experience it.

As for what happens from this point forward, well, that’s for our kids to worry about. They will be the ones who have to worry about the robot revolution, because I’d say it is at least 30 years away. At that point, I won’t even care anymore.

I just find it incredibly amusing that — of all the companies in the world — it is Domino’s that is being the innovators here. Yes, I know Apple and Microsoft and Google are making all this crazy shit, but all they’re doing is evolving technology that already exists. Domino’s is actually taking technology and replacing something that has been done one way since the dawn of man.

Domino’s is actually taking away human labor by doing this, and it’s only the beginning.

Soon enough, robots will be policing us. Delivering our mail. Educating our children.

And yes, slaughtering us in open warfare.