It’s gotten to the point where it’s getting very difficult to keep up with all these new social media apps.

I just joined Instagram a week ago, and I have still yet to actually utilize it. But I figure that one of these days I’ll snap some type of photograph and have a half a mind to upload it. When I joined Instagram, I thought I was meeting my social media quota for the week.

It’s stressful and cumbersome to adapt to a new app. There’s so much lingo, so many terminologies and so much that others are already aware of before you even learn anything. After joining Twitter a few years ago, it took me about eight months just to learn what the point of hash tagging was. And to be honest, I still don’t exactly see the merit.

There’s those who hash tag for a practical purpose, as in to categorize their posts, and then there’s people who insert absolutely pointless

hash tags that offer no purpose, such as #Don’tJudgeMe or #Don’tCare, or my personal favorite, #TooManyHashTags.

People may just be noticing now that Facebook has just recently incorporated hash tagging. I know this because I wrote a hash tag on a friend’s facebook status as a joke yesterday afternoon, and when I checked back on it a few hours later, it was suddenly clickable. I also saw that other people’s hash tags on my Newsfeed were now visible in link form. Upon clicking on them, you are taken to a separate page that shows other people’s Facebook statuses across the world who used that same hash tag.

It’s just another instance of Facebook saying, “Well, that works for someone else (in this case, Twitter), so since we want to stay relevant and on top, we’ll just do it too.” #NoShame.

But now there’s Vine. And I’m assuming it’s pronounced the same way as the plant. Actually, is a vine a plant? Are vines even real things or do they only exist in the movie Tarzan?

On any level, I couldn’t help but notice recently that every link on people’s Tweets starts with the words, “vine.” It then took me a few weeks to comprehend that this is actually a separate entity, and not anything associated with Twitter.

And then it took me an extra few days to realize that Vine is its own social media app, and is available on mobile phones. So Instagram has dominated photographs, and now Vine is attempting to monopolize videos. I’m assuming its only real benefit is that it allows you to upload a video more simply. I can’t think of any other features that would make it so great otherwise. Perhaps there is an editing tool involved. I don’t know. I suppose I’m going to have to download the app and see for myself.

When I try to play a Vine video (…or do they call them vineo?) on my laptop, it never works. I don’t know if that’s a problem with my own computer or if they are only designed to work on phones? I think my stubbornness to embrace Vine is a direct result of its inability to work for me. It’s like the Polar Express when the adults stop hearing the ringing of the bell because they no longer believe in Santa Claus. Well, I refuse to believe in Vine.

Anyway, the point here is that it is becoming way too difficult to keep up. The minute I join Vine, I’m prepared for some other social 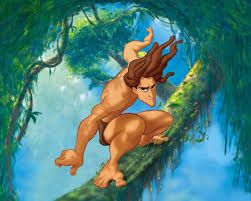 media app to come along and confuse me to no end. The worst part is that they seemingly popularize overnight. I used to laugh at Instagram, but then I suddenly realized that everyone in the world was on it except me. And now I feel the very same thing is about to happen with Vine. Might as well beat it to the punch and join before that happens.

Heck, Tarzan himself is probably even on Vine. I can even imagine his first post. A self-taken video — also known as a “selfie” — of him standing on a 100-foot high tree limb saying, “Hey guys, Tarzan here. I’m swinging on a vine, and uploading it to Vine… get it?” And then when he uploads it to Twitter he’ll include hash tags that say #RainForestProblems #Don’tJudgeMe #RaisedByApes.

And I’m only 26. Imagine being an adult and trying to figure all of this crap out? I went to a convention last year and actually took an hour-long social media class. Instagram wasn’t even mentioned. That’s how fast this is all evolving.

But what the hell. Only way to learn it all is to try it yourself.

I need a drink.